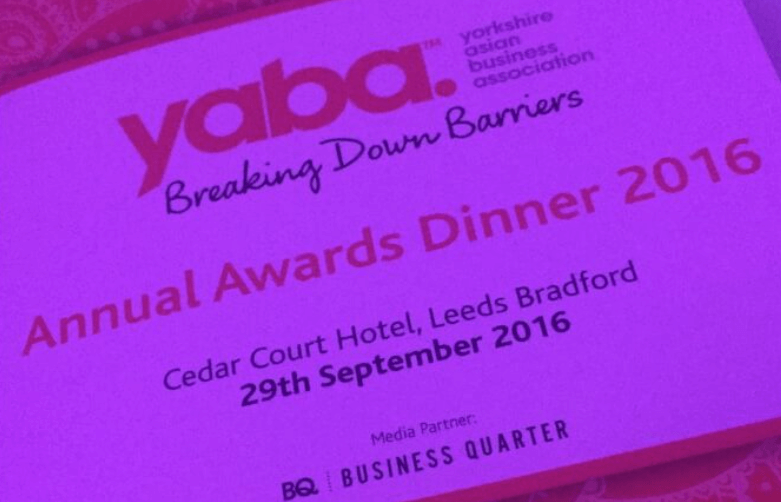 What a great celebration! Thank you to those that attended to help us celebrate the achievements of Yorkshire’s finest businesses and professionals. Our VIP guests included:

Hosted by the outstanding Tommy Sandhu BBC presenter, the event which was held at Bradford Cedar Court was attended by 450 guests such as DLA Piper, PWC, KPMG and more. Our guests were wonderfully entertained by Tommy and keen to hear about who would be taking home the awards. To add to the evening further there was a magnificent performance by The Band of Royal Armoured Corps who played Ilkley moor bar t’at in a reggae and bhangra style and incorporated popular Bollywood tunes; it was diversity at its best. There was also a heartfelt presentation by Colonel Butterworth in which he talked about his experiences and journey with diverse communities in the Armed Forces. The British Army worked in collaboration with YABA to give people more of an understanding of the Armed Forces and the challenges they have to face.

YABA cannot express how amazing the mouth watering food was, which was prepared and served by MyLahore, they excelled all our aspirations.

This year’s awards saw a huge diversity among Asian businesses, which was reflected in the award winners who each exceeded the judge’s expectations against the criteria, making for some difficult decisions. The following business and individuals were recognised:

Professional of the Year
Winner: Noor Ali – WM Morrison Supermarkets plc Category Manager World Foods & Free From. Noor’s passion for her industry and hardwork along with her desire to inspire those around her and her modesty in the outstanding achievements she has gained in her life made her an ideal person for this award.

Highly Commended:
Ranjit Uppal (Switalskis Solicitors)
Ranjit’s incredible enthusiasm and dedication whilst working tirelessly for his clients earned him the Highly Commended position in this category.

Pritpal Singh (PWC)
Pritpal earned Highly Commended in this category for his commitment to doing the right thing for others and tackling the issue of gender diversity.

International Business of the Year
Winner: Surfachem (Richard Smith)
Surfachem’s significant international growth that has seen the company open operations in Brazil, Poland, Scandinavia and Benelux in the last 5-10 years secured the award for this category.

Retail Business of the Year
Winner: Bradford Bazaar (Jas Maharaja)
With customer satisfaction a priority coupled with the creation of 100 jobs in 2016, Bradford Bazaar stood out as a winner in this category.

Food & Drink Business of the Year
Winner: Akbar’s (Shabir Hussain)
Akbar’s won this category with their bright, modern and buzzing chain of South Asian restaurants and they’re passion for what they do.

Emerging Entrepreneur of the Year
Winner: Manjit’s Kitchen (Manjit Kaur)
Manjit became the front runner for this award as her story was an incredible one; starting from home with just £200 she has gone on to win multiple awards, open a cafe and continues to expand the business.

Special Award
Hanif Malik, OBE – founder of the Hamara Healthy Living Centre, and a leading community figure who is a strong advocate of the Third Sector
Kadeena Cox – Four time medal winner at the 2016 Paralympics, in both the cycling and athletics.
Mohammed Aslam, MBE – Managing Director of Aagrah, the restaurant chain with 14 branches, was established in 1977 in Shipley.
Sir Kenneth Duncan Morrison – Former Chief Executive of W Morrisons and current Life President of the brand.